Lovely Christmas Day under the cat's eye at Fluffs house. Lots of Blueberry wine and party games.
All went well until I tried to takes Fluff's Photo;  they are very quick these tiny things!
Merry Christmas all! 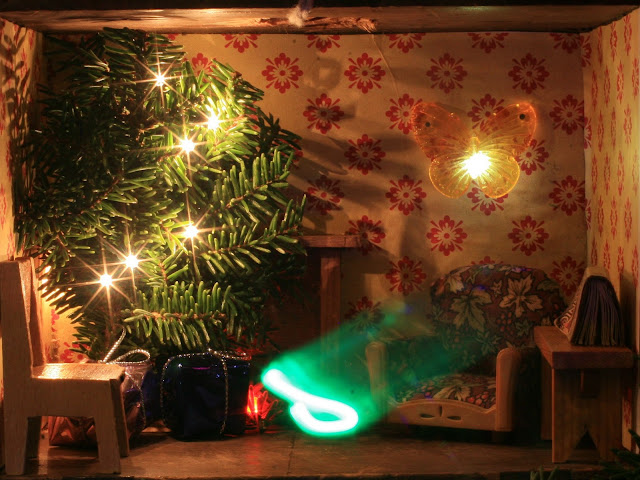 Posted by simon sinkinson at Monday, December 26, 2011 No comments: 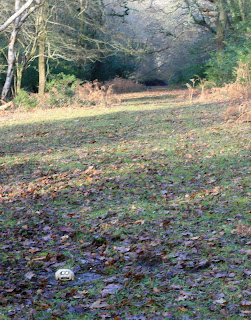 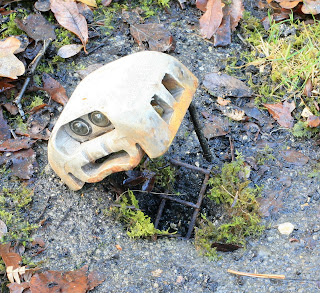 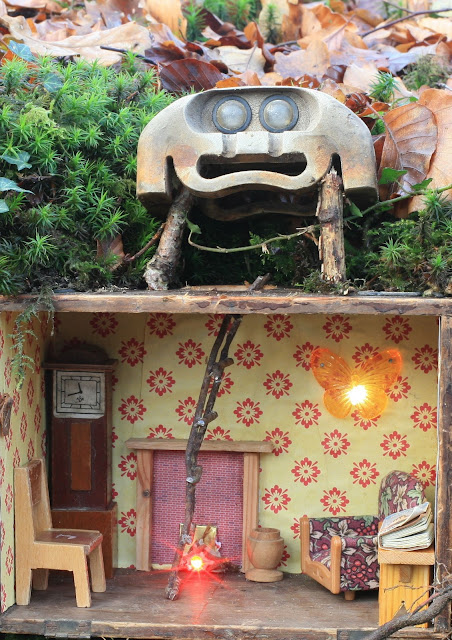 I got on so well with Fluff; she told me many tales and of her little shop, 'Fluffs Stuff', a very important place for all tiny things. After several glasses of blueberry wine, I felt I should be going, and as I was climbing the ladder, my hopes were answered when Fluff asked if I would like to come to her home for Christmas.
She said a few tiny things were coming to her little home.  Joy! Joy! but how did she know I was on my own for that most loverly time of the year?
Merry Christmas!
Tiny
Posted by simon sinkinson at Wednesday, December 21, 2011 1 comment: 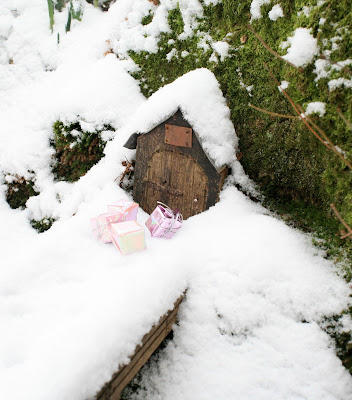 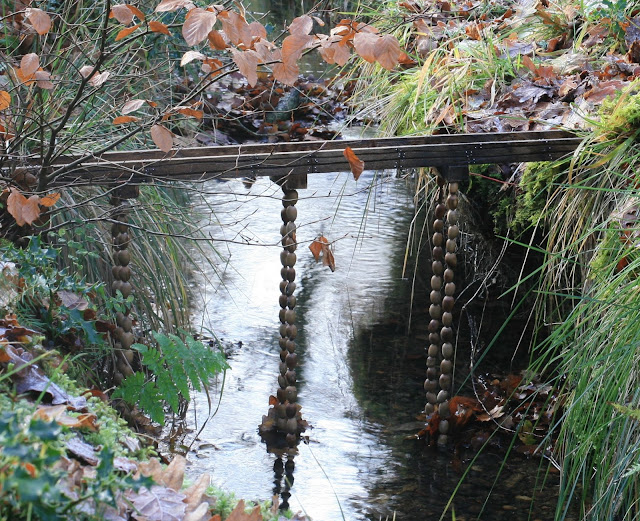 I went to find Hubert the snail this morning, to ask him all about the mechanical bird.  I found him eating a bus ticket with one of his brothers. When I mentioned a mechanical bird they both stared at me with a blank expression, but when I added, 'Tiny Tours', well, I thought they would both die of laughter! I don't know if any of you have ever seen a snail laugh, but let me tell you, it's not a pretty sight!
Their skin wobbles up and down and in and out of their shell; bubbles of slime pop from their mouths and in this case, bits of regurgitated bus ticket flowed like larva onto the ground. Finally when the slimy tears had cleared from Hubert's eyes, he told me a very funny tale...
Lady Daphney was a tiny thing with vast wealth. Apparently she felt it quite unbecoming to fly under her own steam and thought it her duty to convert the 'tiny world' to this way of thinking. What caused this thinking was an incident that occurred when she was a young thing;  an elf had looked up her skirt while she flew over head. This little elf was a dab hand with a pencil and managed to immortalise this moment with a sketch. It was hung for a short time behind a radiator in the art gallery at Furzey.  Lady Daphney had the picture stolen by a gang of cut-throat lady birds, and a turf war broke out between elf and lady birds. That awful time ended with the re-seeding of the main lawn.  Lady Daphney then offered a ten thousand shiny things reward for any clever tiny thing that could build a flying machine, and low and behold, Teddy dragonfly stepped into the breach. He had studied the giant flying machines of the human world and had designed a similar thing. 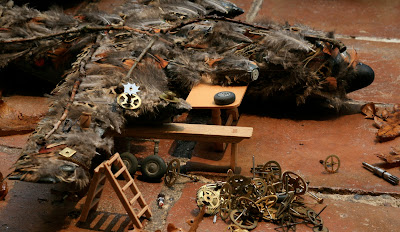 The shape, Hubert admitted, was magnificent;  built out of twigs, moss and spiders webs, but when Teddy started stealing birds feathers, Hubert could see the project going a little awry.
Teddy, you see had a simple approach -  if it looked the part, it would work. His reasoning was thus:
1.   If it resembled the shape of the human craft, that's a start.
2.   If it had feathers, it would fly...... Bingo!
Only it did not!  Teddy had to know more about the workings of human machines.  He flew many days to a little airport called Hurn and observed the comings and goings of the giant metal craft.  He managed to hide on the human craft and watched flaps being opened in the sides of these craft.  What he saw within, filled him with dread;  the machines were full of fearful cogs, pipes, wires and lights.  None of this he understood.  He was in a scrape now, but in Teddy style, he decided that if he could find similar looking tiny things and fit them in his bird, all would be well. 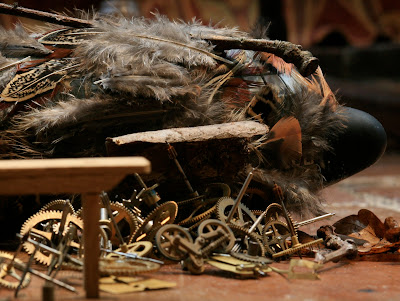 Teddy borrowed, stole and made all manor of complicated things and threw them in the bird.
As the mess became bigger he became more confident, until, on a Spring day, he announced 'Tiny Tours' were ready for business.
Tiny tours made 8 flights in all.
The first was a publicity flight around Minstead and Emery Down.
The forty 'tiny things' that boarded where so excited that little did they know it was 'tiny excitement' that kept the bird in the sky!

Subsequent flights were all kept in the air by varying levels of enthusiasm, (little things buzz when exited).
But the last flight was full of very depressed and hung-over stag beetles, returning to Holly Hatch after a stag night. Their glum faces and fear of their wives wrath brought the little aircraft down with a bump . 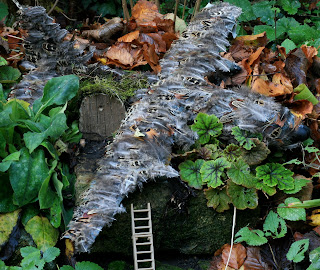 The bird flew no more, but it's wreckage is still there, and I went to find it with Hubert.  A very proud 'tiny thing' has made her home in the warm fuselage, and it is lovely to see things not going to waste.
Regards Tiny
Posted by simon sinkinson at Saturday, December 03, 2011 1 comment: