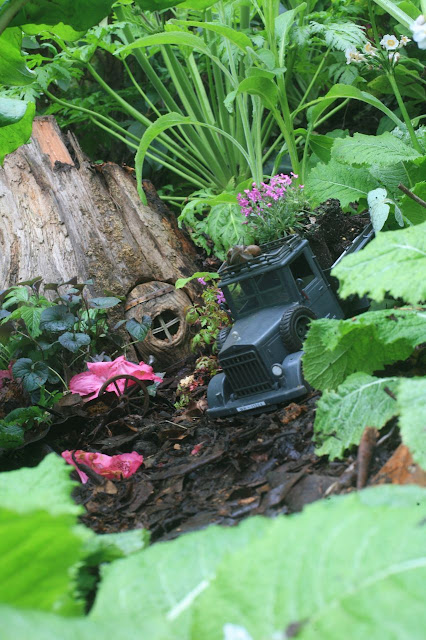 Well, it's finally happened:  a few tiny things have left Furzey Gardens for the Chelsea Flower Show and I have my doubts they will get to London...
Apparently their answer to the transport problem was solved while Hubert, the snail, was chatting to  Clive, the handysnail.
Hubert asked him if, maybe he had seen a rocket fly over, an explosion or a burnt frog?
'No!' said Clive,  'Why do you ask?' Hubert went on to tell the sad tale of rocket Branson and his unknown fate. Clive nodded while this tale was told and then told hubert that he had dabbled with flight, trying many very dangerous modes, but in the end had conquered the skies with a huge airship!

He told, how for many years he had moved Lady Daphany's shrubs around the garden. Well, low and behold, the airship was serviceable and could quite easily move Hubert's Lorry and plants.  So, on Tuesday 1st, many snails gathered with the tiny things at Clive's workshop.

They connected ropes and, under the instruction of Clive, they floated out of Lady Daphany's garden and into the clouds!  They soard up and up and then were gone!
I had no idea a Zeppelin could fly so high - Furzey must have looked like a freckle on an old mans face!

You might ask why I am always so pessimistic concerning tiny inventions, well, let me tell you the reason in this case... When I asked Clive what he had made the Zeppelin out of,  he replied, 'Oooh, when I re-roofed Diarmuid Hall, I had lots of old bendy metal left-over, it was perfect!'
Oh no! I think I know where this is going...!!
I am also popping up to Chelsea to help the students at Minstead Training Project and Furzey Gardens, so I will report back if they arrive!
Kind regards,

Tiny
Posted by simon sinkinson at Tuesday, May 01, 2012 No comments: