2nd Wonder of the Tiny World 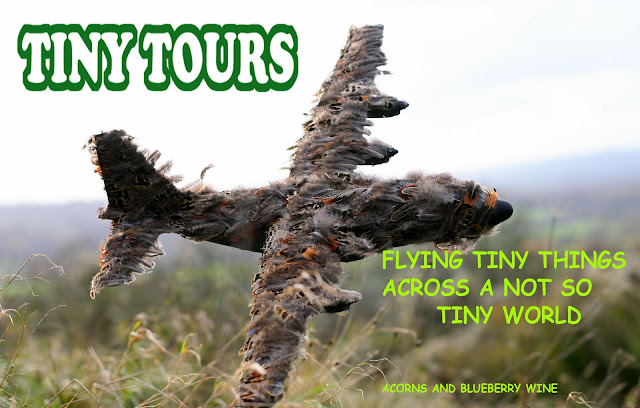 I came across this poster;  it was behind a pile of wood in Silly's workshop.
'Wow!' I said.  'What is it? It's truly amazing!'  Silly said that it was awful really, 40 tiny things packed in a mechanical bird.  And being showered with blueberry wine every time they swerved out of the way of an amorous kestrel, or dropping violently into grass, as gangs of sparrows landed on the wings and pecked at the stowaway ants and beetles that hid in the feathers.  Silly had apparently taken this trip with his mother attempting to holiday at the tropical paradise known as Goatee Beach in Totton.
Silly knew nothing of the mechanical birds history, only that it made very few flights before crashing into a hedge near Frogham.
I will ask hubert about this as he seems to know all there is to know about tiny things, and report back.
This surely has to be the second wonder of the tiny world!

I popped-over to Silly's little workshop to check he had not forgotten Aristotle's new door.
I could do without another up-rising from tiny things!  I was so pleased to find Silly hard at it, even though he had a stinking cold.  I sat with him for a while and he told me such tales, some happy and some very sad. 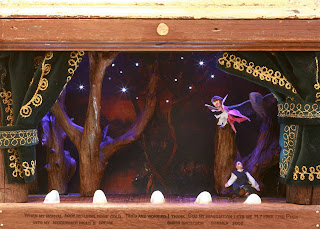 Apparently, Silly had not always wanted to be a carpenter. When he was very young he travelled with his family many miles to visit the fairy theatres and was lost forever to acting.  He remembers sitting in the grass and watching A Mid-Summers Night Dream.  That magic night was the first time Silly remembers hearing his heart beat, and he knows it beats and waits for him still.  I think this theater maybe another 'wonder' of the Tiny World, so I will try and find it one day. 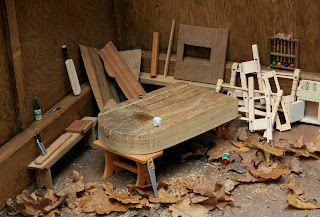 Anyway, Silly made a good solid door and in the afternoon, Hubert came over in his lorry with some of his brothers to collect it.  I do hope this keeps the tiny things happy. 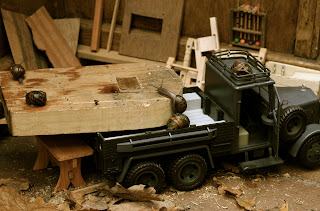 They are very busy fundraising for the Furzey Gardens Chelsea flower show.  Please do send them something at www.justgiving.com/furzeygardens
Regards
Tiny
Posted by simon sinkinson at Monday, November 21, 2011 2 comments:

I left the rabble, determined to nip this in the bud, and got round to Moss Side where 'silly' was working, repairing a wooden bicycle that wooden go.  But as 'silly' came to the door, he spotted the angry rabble of tiny things and shot out the back!  Again, I had to listen to their squeeking and ranting.

I thought it best to find the tiny teacher, Grace the robin, because she might be able to calm them down.  So, I made my way to the school.  No sooner had I arrived than tiny voices were heard. The little things climbed onto the school roof and protested about everything from broken doors and clumsey gardeners to why they could not have tiny motorbikes. Then very nicely Grace pointed out that if the wider world new how naughty they were, they would not be allowed to go to the Chelsea Flower Show.
Hearing this they all stopped their shouting because they had put a lot of work into this and the tiny Queen was planning to meet the Queen of England.
So they all went to a snails house and drank him out of blueberry wine!
Thank goodness that is over -  I have seen tiny war and it's not nice!
Please Please  help the tiny things get to Chelsea Flower show Follow the link to find out more
www.justgiving.com/furzeygardens

Posted by simon sinkinson at Wednesday, November 16, 2011 No comments: 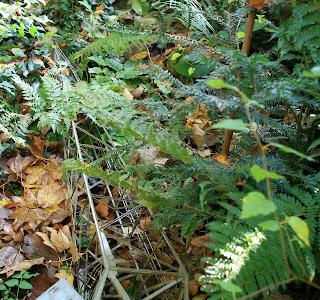 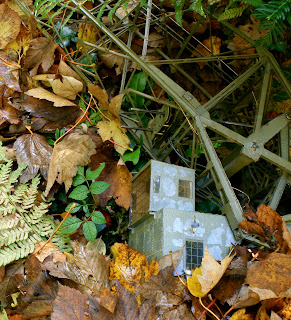 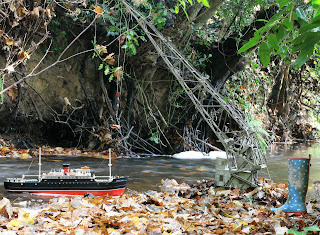 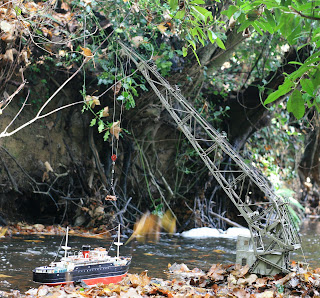 And if you look very hard in the last one, I am sure that's a tiny thing flying from the camera -
they are very fast!
Posted by simon sinkinson at Monday, November 14, 2011 No comments:

As promised, Hubert turned-up on Saturday with the little postcard.
Surprisingly not in his lorry, but with snail friends and relations strapped under a very scraggy looking crow.  Apparently they were all going to a funeral!
Tiny things attend a lot of funerals. These are not the type that humans attend, but are in fact funerals for ideas.
They are so upset when dreams die, that they just have to remember them.
Hubert said to tell all tinydoors readers to keep their dreams alive!
The postcard shows the tiny things crane loading acorns into the mythical 'Jeanie Deans', often mentioned by BB in his lovely books about the Little Grey Men. 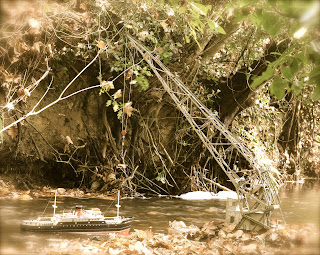 Hubert also had a very slimy map and I will attempt to find any remains of this 'first wonder' of the Tiny World.
Posted by simon sinkinson at Sunday, November 13, 2011 No comments: 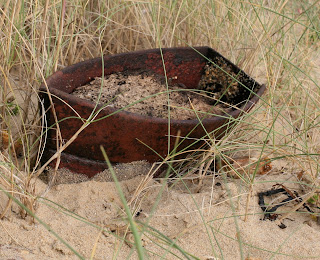 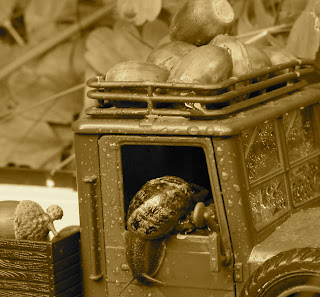 It will give me something to do until my hair grows back!
Posted by simon sinkinson at Tuesday, November 01, 2011 2 comments: