Hello,
I have just turned 50 and although I don't like the idea of getting old, it seems to justify having so many aches and pains. I was telling Hubert the snail about this and he asked me about my family.
I was  giving Hubert a run-down on my life story and explaining about all the family quarrels and troubles.
He told me an amazing tale of a tiny thing called Samuel Elf Jackson. This little thing could not stand the simmering feuds that went on in the tiny world. If he heard of a feud between the small folk he would send them a letter. This note would explain to the parties that they would have one year to make it up before they received a visit from Samuel Elf Jackson.  'Oh!' I said. 'was he big and did he carry a large stick?'  'No, oh no!' said Hubert.  'Samuel's a tiny little chap with bushy hairs in his ears!'
'So what did he do then?' I asked.
'Well,' went on Hubert.  'a year on, in the dead of night Samuel Elf Jackson would push his cart to both  creatures doors and outside their homes would plant a tiny phone box'. 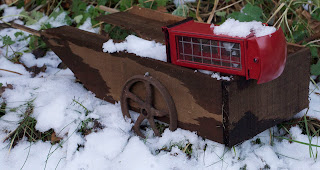 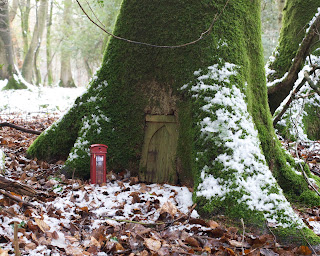 'What for?'  I asked.  'Well', said Hubert, 'as the morning broke, the little phones would both begin to ring and would continue to tinkle until those grumpy folk would open their doors and answer the persistent little phones. Sure enough the little adversaries would find themselves talking to each other!'

'It was rare,' Hubert explained, 'for the conversations to make headway on the first morning, but Samuel would not move the little phone boxes until the little things had become so weary of early morning calls that their communal hatred for the little phones brought them together'.
'What a great idea!' I thought!

Tiny.
Posted by simon sinkinson at Friday, February 10, 2012 No comments: